Founder of Rethink, Matt Jozwiak, to make free or low-cost meals for New Yorkers in Need

Founder of Rethink, Matt Jozwiak, to make free or low-cost meals for New Yorkers in Need

A group called Rethink has teamed up with the Michelin-starred restaurant to feed New Yorkers in need. 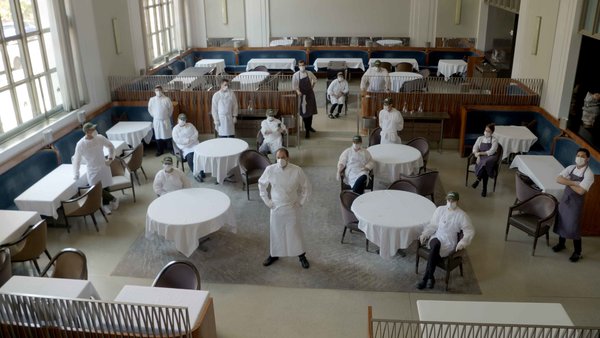 Daniel Humm, center, and staff in the dining room at Eleven Madison Park, which has closed in the health crisis but will turn out thousands of meals for New Yorkers in need.

In the days before New Yorkers stayed home and people still touched their faces without dread, Matt Jozwiak was preparing to help.

As a founder of Rethink, a nonprofit organization that uses excess food from grocery stores and restaurants to make free or low-cost meals for New Yorkers in need, Mr. Jozwiak knew he would soon be on the front lines of a city grappling with the coronavirus. Restaurants would close. People would need food.

“It’s about equity,” said Mr. Jozwiak, 32, standing in his commissary kitchen at the Brooklyn Navy Yard on a bright day in mid-March. “That is our motto. Well, right now, it’s ‘Put out the fires,’ but, you know.”

The group now has a handsome new work space: the highly acclaimed and normally expensive Manhattan restaurant Eleven Madison Park. On Thursday, Daniel Humm, the chef and an owner, announced on Instagram that his Michelin-starred restaurant would become a commissary kitchen for Rethink, turning out thousands of meals a day to be delivered free to clients of Citymeals on Wheels and to hospital workers.

“This city has given me everything, so I really wanted to figure out what I could do to give back,” Mr. Humm said in a phone interview.

The first meals are being delivered Thursday. Each costs $5 to $6 to make, which is competitive with the cost of other emergency food. Rethink and Eleven Madison Park have partnered with American Express and Resy to fund the initiative.

“We basically turned them into a soup kitchen,” said Mr. Jozwiak, a former chef de partie at Eleven Madison Park.

The meals will be made by 12 chefs who were working at the restaurant when it closed last month because of the health crisis.

At the start, they will cook about 1,000 meals a day, then scale up to about 3,000 meals, matching the number made at the Rethink commissary kitchen at the Brooklyn Navy Yard. Baldor Specialty Foods, in the Bronx, has been donating food to Rethink during the outbreak.

For Mr. Jozwiak and a Rethink chief strategy officer and co-founder, Winston Chiu, this is just the beginning. Rethink has also started a Restaurant Response Program that will give about 30 restaurants up to $50,000 each to cook for those in need and keep restaurant workers employed.

Little Tong Noodle Shop, in the East Village, was the first recipient, of a $20,000 grant. If it continues to reach its goal of serving 300 meals a day, it will be eligible for another $20,000, Mr. Jozwiak said.

Rethink has also opened its first brick-and-mortar storefront, a cafe in Clinton Hill, Brooklyn, within walking distance of expensive brownstones and buildings run by the New York City Housing Authority. The cafe, which is registered as a soup kitchen, serves a restaurant-quality meal to anyone who walks in for a suggested $3 donation.

“Dignity is something that I fear is going to get lost in this scurry to get people food,” Mr. Jozwiak said. “We wanted to make sure that when we were making food, it was beautiful.”

Let us share your good news! Send in your story to LMcGuire@PNTax.com.